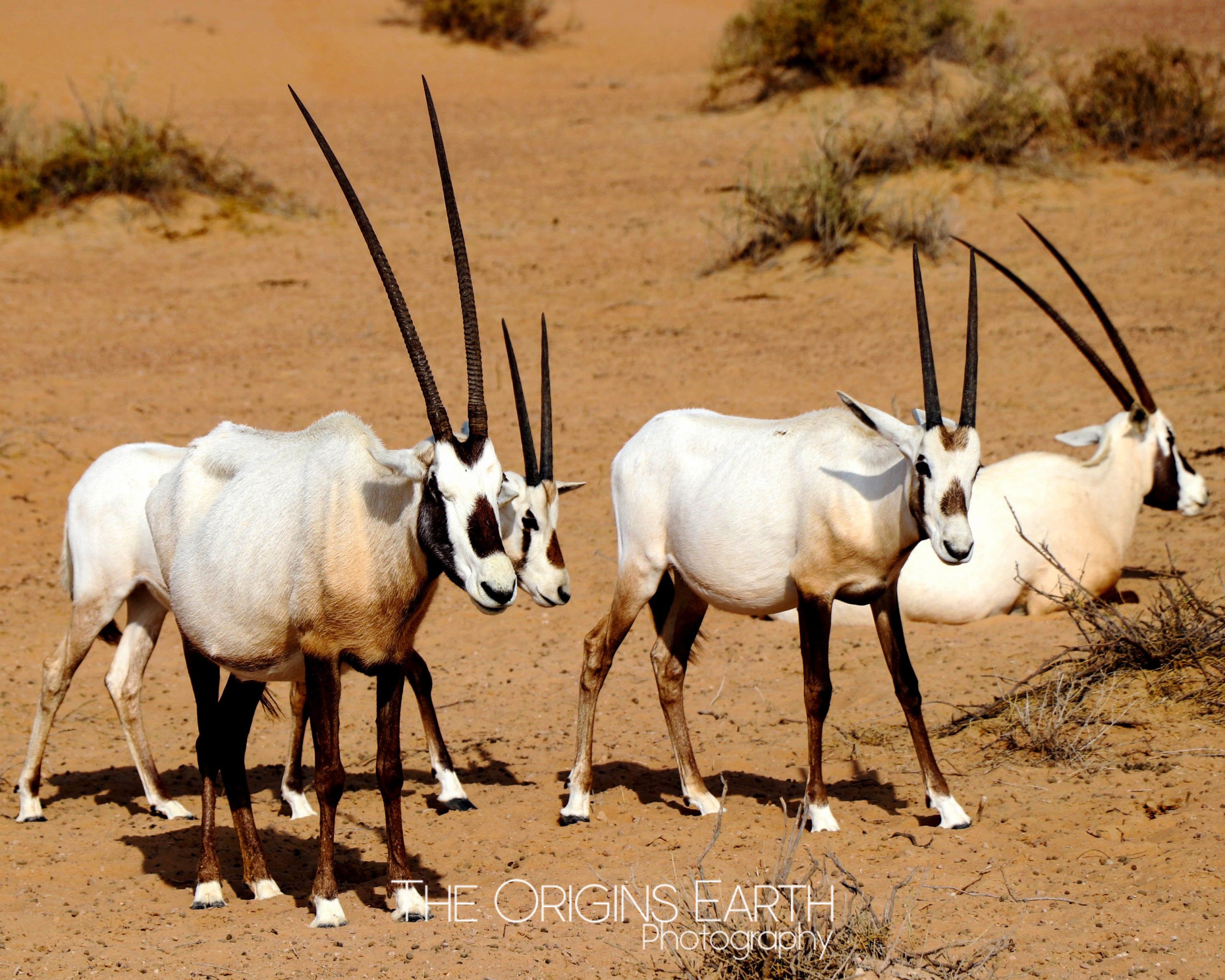 I stayed in the United Arab Emirates in December 2019 and I had the chance to see the Arabian Oryx in the Dubai Conservation Desert Reserve. Indeed, apart to be in a protected area this is quite difficult to see them in the wild seeing that they are threatened to be hunted by poachers. In order to protect the species, most of countries such as United Arab Emirats and others countries from the Arabic peninsula have taken in place a conservation plan for the Arabian Oryx. 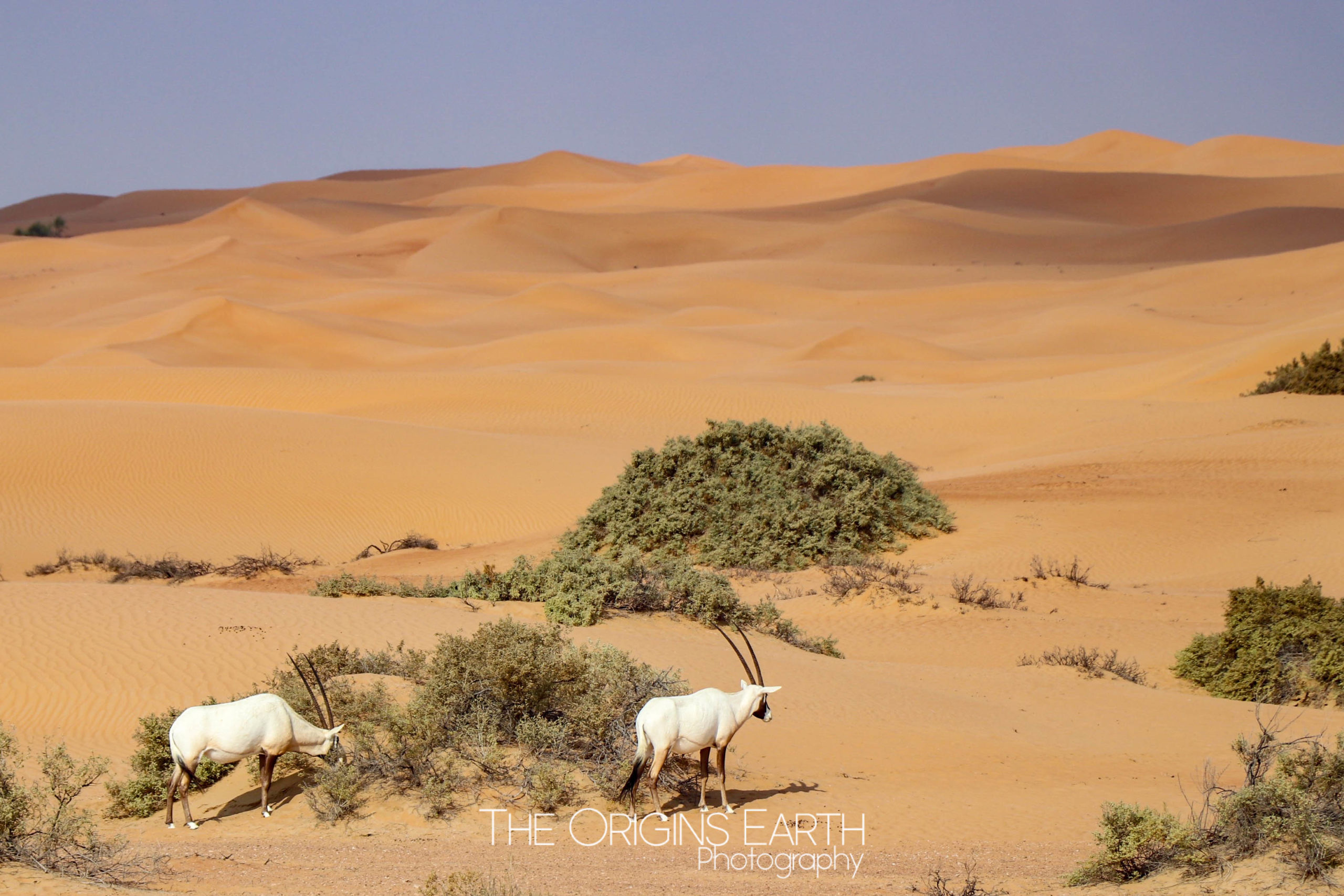 The Arabian Oryx is a mammal that is the only one who lives in Africa, which is not the case to the others, Oryx species. He takes part of the 4 species of Oryx and lives mainly in the Arabic peninsula from the north of Kuwait and Iraq.

The horns are curved and ringed

This animal mainly eats grass but he can eat leaves, buds, and fruits too. He has the capacity to detect the rain miles away so that he can feed new sprouts.

Living in a dry environment, the Arabian Oryx is able to stay for long periods without drinking thanks to the water they can receive from the plants they feed.

Living in a herd of 60 animals, they mate between October to May and their gestation period is 9 months for one baby per female. Their sexual maturity is around 2 to 3 years old. The life expectancy of an Oryx is about 20 years in the wild.

Their death’s causes are due to male fights, snail’s bites, diseases and drowning yet. 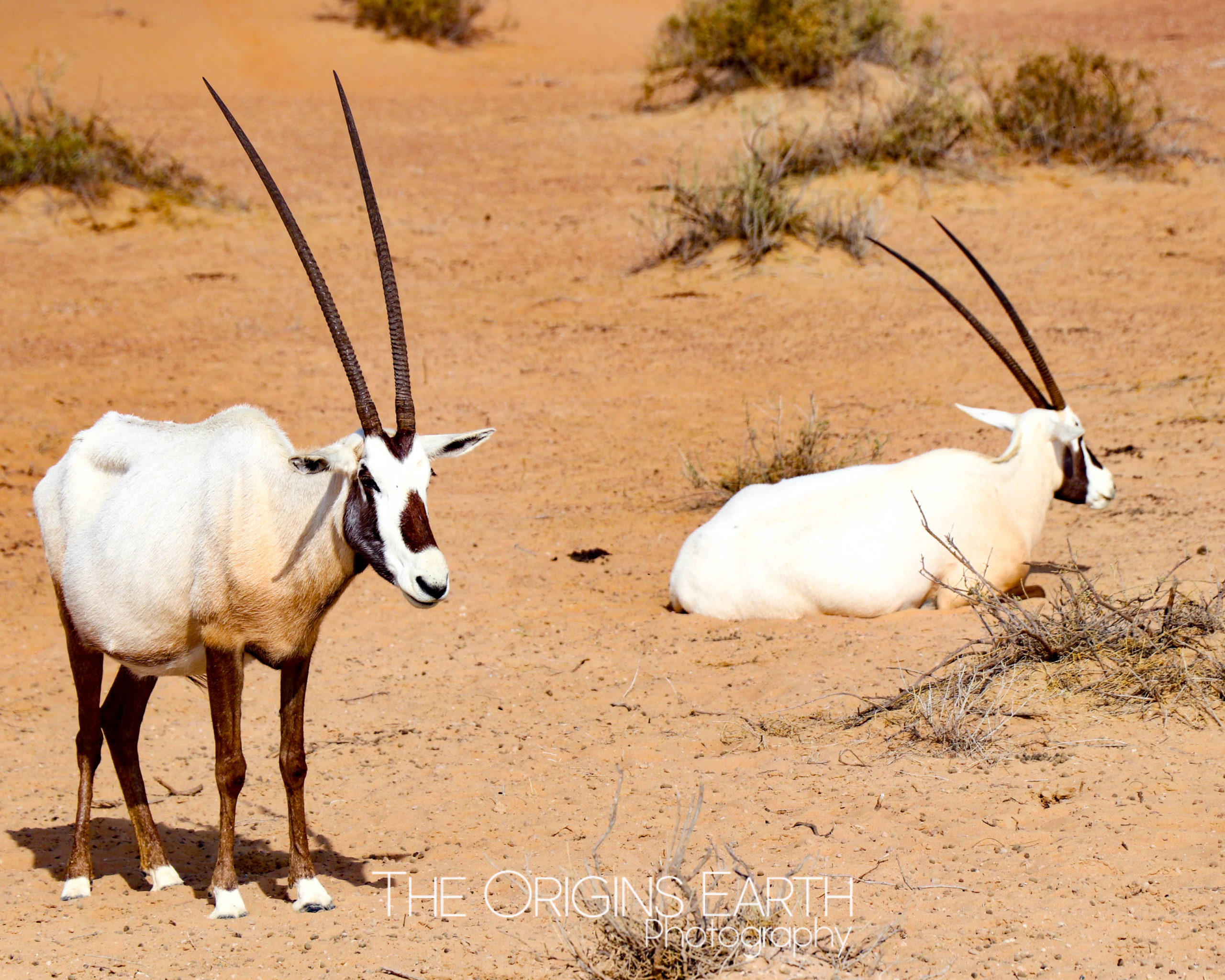 The nomads of Arabia Peninsula called Bedouins hunted the Arabian Oryx for its meat, hair and its leather 40 years ago. Hunting as a hobby was an activity that has been a reason to their extinction in addition to the others named above. But, its extinction has been accelerated after the Second World War in the countries such as Egypt, Iraq, Kuwait, Yemen, and Syria. Indeed, in the 50’s, hunters with vehicles and weapons had the opportunity to kill them in distance more easily than on camel back that Bedouin did it at the time.

With the arrival of drilling petrol and petrol companies, recreational hunts accentuated its extinction provoking an imbalance and, so the wild Arabian oryx has been decreased drastically in the 60’s and completely disappeared in 1972 with the loose of the last wild Arabian oryx.

Nevertheless, measures of reintroduction of this specie in several countries especially in Oman, Qatar, and in the United Arab Emirates have seen the light of the day to protect this species in order to reach 850 mature animals but only in captivity because the Arabian oryx is still threaten from poaching.

Furthermore, with the organisation “Fauna & Floral International” specialised in the conservation of nature that the Arabian Oryx is going to be protected by the launch of the operation called “Operation Oryx” whose the aim is the preservation of this species followed by a reintroduction in the nature. First, the operation allowed capturing a number of males and females from a small group in the wild to establish reproduction in captivity in order to persist the species avoiding consanguinity.

This operation Oryx is a global success concerning the reintroduction in the natural habitat of this species that extent and was the first species of mammals to benefit from it.

However, the reintroduction of Oryx motivated the poaching’s arrival. Indeed, in the 90’s in Oman the number of this antelope has decreased of 300 animals killed or captured by poachers, and mainly was female with their babies the most coveted.

In the United Arab Emirates in the 60’s, the Sheikh Zayed decided to capture some wild Oryx and bring them to Al Ain in order to reintroduce them in the desert of Abu Dhabi where they can live free. Since, the number increased constantly to reach a population of 6’000 Arabian oryx.

In Dubai, this is the Dubai Desert Conservation Reserve (DDCR) that has been designed as a protected area of 225km2 and that is the only place where the Arabian Oryx can be seen. The goal of the DDCR is to combine touristic development and the protection of fauna and flora of the United Arab Emirates.

Conservation of the Arabian oryx in Saudi Arabia and in Qatar

Other countries of the Arabic peninsula have taken in place programs of reintroduction for the oryx especially in Saudi Arabia that has been done between 1990 and 1995, one in the protected area called Uruq Bani Ma’arid and the other one in a reserve called Mahazat as-Sayd. It is true that since the establishment of this program, the population of Arabian oryx has increased from 400 to 700 animals between 1997 and 2003.

Regarding Qatar, a hundred of Arabian oryx are breeded in the conditions near to those they find in the wild in several parks in the country such as Shahaniya Wildlife Park, Ras Osheirij et Al Mas-habiyya.

Thanks to the captivity, its population is not only well protected but the reproductions are still well managed with an estimation of 6’000 to 7’000 animals in semi captivity in the following countries: Qatar, United Arab Emirates and Saudi Arabia. Moreover, there are 1220 animals in the wild whose 600 animals in Saudi Arabia and 400 in the UAE. It needs 1400 Arabian Oryx so that this species go up in the IUCN ranking and is considered as a species “almost threatened” finally. 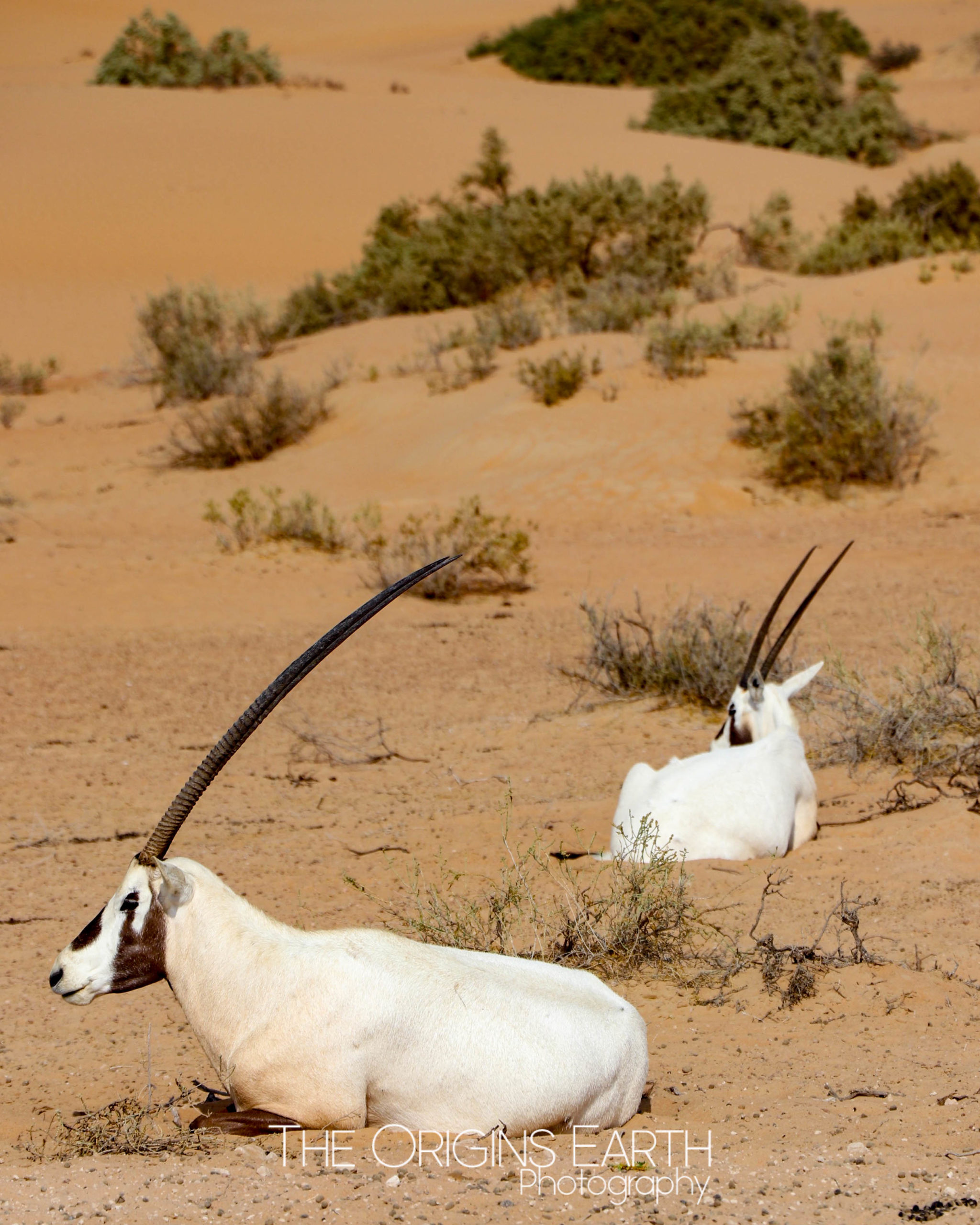 Do you want to read the article “The Arabian Oryx, a vulnerable species” in French?

Thanks to the trips I have made so far, I have realized that my interest lies in the protection of the environment and in that of animals.

I observe her and immortalize her because I find her beautiful, touching and incredible, but above all it is with the idea of ​​raising awareness and showing them what needs to be protected.

So to make people aware of the strength, the beauty but also and above all the fragility of nature, I decided to create The Origins Earth.