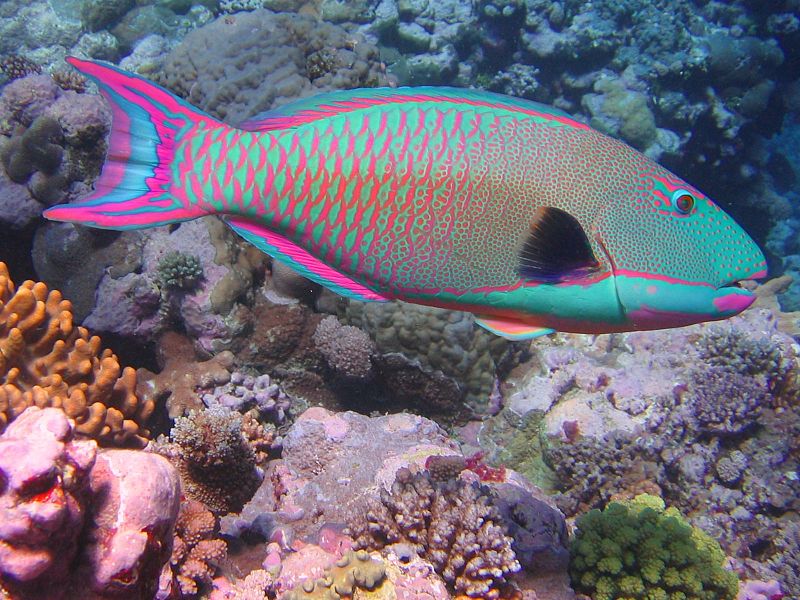 The Parrotfishes can save coral reefs

Parrotfish are found in subtropical regions around the world in coral reef regions. There exist 60 species of parrotfishes and most of them begin their life as females. And then they change into males because they are hermaphrodite.

Parrotfish are coloured and their colours change several times during their life according to their age, sex and even their social rank. Their name came from their dentition that is fused teeth specialised for scraping algae and invertebrates from coral and rocks. Indeed, with their “beak” they are able to detach algae from rocks and they grind up rocks too when they are eating.

After digestion, the sand is produced. In fact, those fishes play an important role in the conservation of coral reef due to their feedings habits. It is an important process that helps the production and maintenance of the coral sand for the reef biome. They also ingest different microorganisms that are in the water and coral polyps.

Every night, they produce mucus with which they can envelop themselves inside of it. This mucus is a protection against predators.

Parrotfish is the best protector of coral reefs that must be protected.

Indeed, the report by the Global Coral Reef Monitoring Network (GCRMN), the International Union for Conservation of Nature (IUCN) and the United Nations Environment Programme (UNEP), shows the results concerning the Caribbean corals. Indeed, they have declined by more than 50% since the 1970s.

Caribbean coral reefs are an important diversity resource for countries of this region and are home to 9% of the world’s coral reefs.

The report also shows that some of the Caribbean coral reefs that are healthy are those that possess energetic parrotfish. Why these coral reefs are particularly in good health and not the others? Because like Flower Garden Banks National Marine Sanctuary in the northern Gulf of Mexico or Bermuda, they have restricted or banned fishing practises such as fish traps and spearfishing. Overfishing is the first cause of their decline but also coastal pollution, and so it is against this, parrotfishes have to be protected.

On the other hand, we notice that reefs where parrotfish are not protected have declined severely like Jamaica, the entire Florida Reef from Miami to Key West and the U.S Virgin Islands.

In conclusion, by re-establishing parrotfish populations and protecting them from overfishing and coastal pollution, this could help the reefs recover.

Hermaphrodite: It is an organism that has both male and female sexes.

Mucus: Mucus is produced from the mouth of the parrotfish forming a protective cocoon every night before going to sleep. This mucus can help fish against predators.

Internet links for the article